On November 11th, Heritage Auctions will be auctioning the only journalistic art project in existence on heavy weight boxer Mike Tyson. This time capsule of art and photography represents ten hot summer days exploring an experiment in art journalism with the man/child that would soon become the youngest boxer in history to win the WBC, WBA and IBF world heavyweight titles.

This post shows the entire collection of my art and photography in the auction as well as spreads of the Iron Works article in Print magazine. See below for the entire contents. The goal is to see a collector keep the entire project intact for historical purposes.

*All art and photography is copyright Greg Spalenka and may not be reproduced without the permission of the artist. 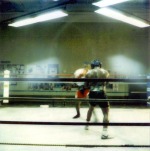 In the summer of 1986 I spent ten days in the gym of legendary boxing trainer Cus D’Amato working on an art project that would become one of the defining moments of my career. I was working in New York City as an illustrator at the time for all the major magazines, newspapers and book publishers when art director Larry Gendron of Sports Illustrated asked me if I would be interested in recording my impressions of a young up and coming boxer named Mike Tyson.

So began my journey to Catskill, New York where I was awed, inspired, humiliated, and deeply touched by my experience with the soon to be world’s youngest heavyweight boxing champion. At twenty years old he was a man/child. Tyson was incredibly sweet and innocent but also a hurricane of anger and power. It was obvious that the force in Mike Tyson was more than physical.

I sketched, took Polaroid pictures and traced Tyson on large pieces of butcher paper to create life size drawings and paintings. I interviewed him, Kevin Rooney his trainer and others who frequented the gym. I learned much about Tyson’s history and the legacy of D’Amato.

My goal initially was to record impressions of Tyson but as I spent more time in this old gym another story presented itself. D’Amato had died the year before but the walls of this space echoed his spirit and wisdom. His devotion to the pursuit of perfection through discipline was evident in the champions he trained, Floyd Patterson and Jose’ Torres. The science he applied to boxing was also connected to his philosophy of living. Rooney understood these principles well and attempted to continue the tradition with Tyson.

Tyson said that D’Amato was the only father he really had. In my talks with him it became clear that he was imbued with a part of his father/trainer. He would repeat the D’Amato mantra, “Fear is your best friend or your worst enemy. It’s like fire. If you can control it, it can cook for you; it can heat your house. If you can’t control it, it will burn everything around you and destroy you.”

When Tyson transformed his rage and fear into energy, you could feel it throughout the entire gym. It was intense and I understood how he managed to knock out so many boxers in the first round. He would project all that energy onto them creating a sense of doom. They were defeated before he laid a punch. His sparring partners had a difficult time staying in the ring with him as he would knock them out or they would run away from him. Rooney was always yelling, “Stay in there and fight, stay in there and fight!” On one occasion Tyson yelled at me and I fell on my butt!

Tyson’s strength was immense. I would stand in the area where he would hit a large bag bolted to the wall. The bag had the image of a person with numbers on it to represent different punches (this is indicated on one of my life size paintings). The entire floor would reverberate with every strike of his fist. How the bag remained attached to the wall was a mystery!

Even with all his super human strength he was still a boy emotionally and lost without D’Amato. I could see the sadness, frustration, anger and apathy. He would not be prepared for the fame and money that was coming toward him like a locomotive.

When I finished this body of artwork the editors at Sports Illustrated could not find space in the magazine to run it! They had me working on other assignments including one with Sugar Ray Leonard but I was disappointed. When the respected art magazine, Print decided to showcase the project and put me on the cover I wrote down my story and “Iron Works” was born. This experiment in illustrative journalism garnered awards from the New York Society of Illustrators and other art organizations.

This auction celebrates the 25th anniversary of Iron Works. This collective time capsule has historic boxing significance. It is the only journalistic art project on Tyson in existence. It represents the last of Tyson’s solitude before his first world heavyweight boxing championship and tumultuous career. There was a pure almost innocent quality during that summer of 86′ and D’Amato’s presence was still strong. That all changed before the end of the year.

The auction includes-
1. Fifteen signed pieces of art, five life size. One is framed.
2. Sixty two original one of a kind Polaroid pictures.
3. Three microcassette recordings of interviews with Tyson, Rooney and Nadia Hujtyn. This includes almost ninety minutes of live coaching sessions between Rooney and Tyson during sparring.
4. Five original copies of Print magazine that include the Iron Works illustrative journalism project.
5. Winner of the auction will have the opportunity for a one – two hour conversation to hear more of my Iron Works stories either by phone, skype, or in person if they are in the Los Angeles area.

All art is flapped with archival paper and repositionable tape. The painting Power and Science (53″x40″) is framed.

Enjoy this bit of boxing history. If you are interested in learning more about Mike Tyson see the documentary, Tyson. It best represents the enigmatic individual I spent time with.