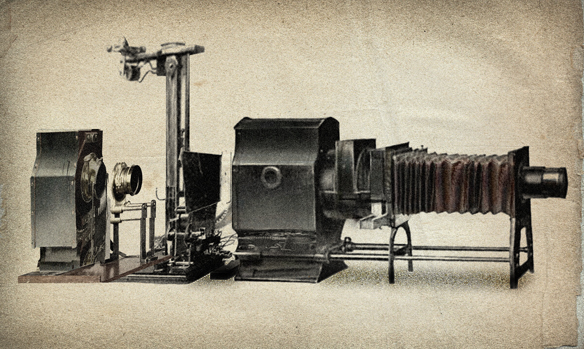 “Bullocks!” Professor Chetham exclaimed when Jonathan Thorp (grandson of Joseph Gilbert Thorp) told him in 1964 that the Crescoptiscope attributed to Jagadish Chandra Bose could actually reveal memories from organic and inorganic matter. Thorp informed him that the Crescograph which was the predecessor of the Crescoptiscope magnified vibrations at such an incredibly high rate that, “If a snail’s crawl were enlarged in the same proportion, the creature would appear to be traveling like an express train!”

The Crescoptiscope simply takes the Crescograph one step further and creates images from that information. Thorp proceeded to hook up one of Vespertina’s pages from the Spiritus Quarere: De Profundus journal to the device. The room was made dark and within a short period of time the instrument began to project dimly lit images on the screen in front of it. Overlapping imagery of people and fantastic worlds were revealed, presumably from the mind of Vespertina in the 14th century. Professor Chetham was skeptical and believed he was being subjected to a magic trick. But as hour after hour of amazing imagery presented itself, some of it undeniably authentic representations of life in 1340’s England, he became a believer. Yet this technology remained lock up in Thorp’s attic until I came along forty years later.